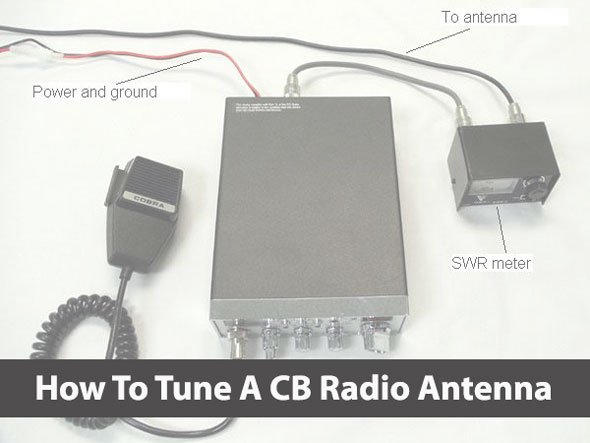 Are you among the few CB radio users unable to communicate via any of the 40 CB channels and you now feel like you wasted all your money? Well, before you go over your head blaming a friend for referring you to CB radios, let’s ensure that you’ve actually been tuning your radio the right way.

At the end of this article you may feel as though this is a simple thing that you could have done faster, but, we promise you that we were in the same boat you currently sail in when we started using the CB radio.

The CB radio’s antenna is also called the SWR setting on the radio. You need to tune the antenna because that is the most important step during the installation of the radio system. Your radio will only perform as well as it should only if the antenna is working at its best.

With all CB radios coming with 4W of power, your antenna should be working as efficiently for maximization of your radio’s efficiency in reception and transmission.

What are the effects of having a poorly tuned CB radio?

So, even though the manufacturer pre-tuned the antenna, they did not tune the antenna on to your vehicle.

So, what does tuning your CB radio mean?

SWR means the standing wave ratio. The SWR meter measures just how well the transmitted power signal that is emitted from the transceiver radio travels through the antenna system and into the atmosphere. Therefore, checking and setting the radio’s antenna is crucial to the overall performance of the radio.

What affects the SWR meter?

How to tune a CB radio antenna

Even before you fix the radio in the dashboard, ensure that you have a short length coaxial cable also called the jumper lead, a device to record the readings, and an SWR meter.

Choose a location for testing the SWR

For the best performance of a CB radio, take your vehicle out to an open area while you tune your CB radio antenna. If you tune your CB radio at a place with other buildings, vehicles or people, you will get incorrect readings. When taking readings, close the hood, doors, and the windows. Keep the antenna cap on if it’s present.

Connecting the radio to the external SWR meter

While other CB radios have inbuilt SWR meters, others don’t. If the SWR meter is missing, get one and connect it to the coax jumper cable. Connect the SWR to the radio.

Note: if the meter reading lies in the Red Zone, abandon the CB radio.

Keep in mind that the objective of tuning the antenna is to make the two readings as close as possible. Any reading of 1.5:1 or below is a passable broadcast signal.

Without proper tuning, you won’t be able to use the CB radio for its intended purpose – communicating, getting weather updates, or accessing emergency services. In case your transmission signal is low, note that you may have a short in the coaxial connectors, you could be on poor grounds, or you may have an improperly installed mounting stud. Finally, know that though simple, you have to be patient because you may not get the tuning right the first few times.