DTMF stands for Dual Tone Multi-Frequency. It's a technology that is used in many countries by many companies to send data over the phone lines.

Usually, it is associated with automated telephone systems, which can be anything from an Interactive Voice Response System (press 1 for ...) to a car dealership or bank account transfer system. 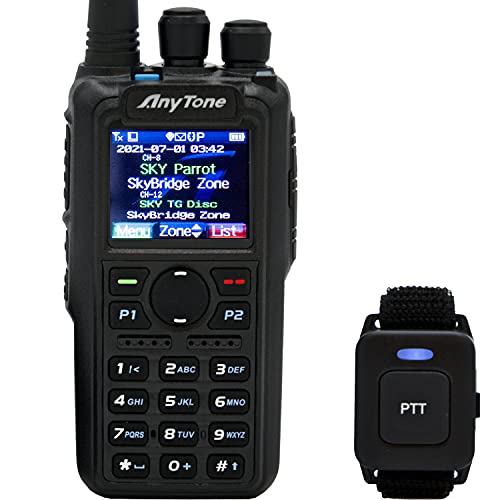 What is DTMF for Handheld Radios?

Modern FM radios include a DTMF encoder as part of the radio. Mobile setups have a keypad incorporated into the microphone, while handhelds have a keypad on the front of the device.

DTMF for handheld radios are tones on radios that are frequently utilized to transmit instructions via radio waves, such as repeater control, autopatch access, and IRLP access. DTMF can also be used to call or notify another station on a selective basis.

Distortion can prevent any tone communication system from being correctly received, so DTMF levels should not be excessively high. Most radios are set to the manufacturer's specifications at the factory and do not require any user adjustments.

For most amateur FM systems, we use a peak deviation of 5 kHz. The general guideline is that the DTMF error should not be more than two-thirds of the maximum variation (2/3rds of 5 kHz equals 3.33 kHz). Most repeater operators I know choose 2.5 to 3.0 kHz as their DTMF deviation.

The DTMF deviation for FM, such as 2.5 kHz peak deviance, should be 1.65 Hz or less if you are using it.

DTMF signals are an “in-band” signaling system, so we'll typically hear the tones being sent over the air if we just listen on the frequency.

It is of note that repeaters are often used to filter out DTMF tones so they don't go through the repeater, so you won't hear them on the repeater output.

How does DTMF (dual-tone multi-frequency) work?

Dual-tone multi-frequency works on a basic level, when you press the key on your phone, you are generating two frequencies simultaneously.

This is called "dual tone". Pressing 1 generates one frequency and pressing 2 generates another - so it's possible to identify which key was pressed by which tone.

In reality, it doesn't matter if you press a 1 or a zero on your keypad - both will generate the same dual-tone. In addition to this, each of these tones is actually made up of two separate frequencies.

The DTMF keypad is a set of numeric buttons. When these buttons are pressed, they generate a combination of dual-tone multi-frequency audio signals which is recognized by decoder circuits in the receiving station. These tones are used to encode and decode data.

On radio, they are normally referred to as DTMF tones or just tones.

On a phone they are typical, there are 16 keys on the keypad with each key representing a different row or column from a standard telephone pad. A typical arrangement has four rows and four columns for this reason it is also called a "four by four" arrangement.

The DTMF encoder in your radio won't simply send one frequency when you press a number - it will send the full dual-tone signal that's made up of all six frequencies (the four original frequencies plus the two "shadow" frequencies).

The reason for using all six frequencies is because the receiving modem must decode the DTMF tones before they are sent over the air.

Here is a simple explanation of how it works :

When you press any number on your keypad or dial pad, current flows through that wire in order to generate its specific frequency (1=1209+901 Hz).

This tip wire actually carries both sides of all frequencies at once. Your modem takes what's coming down this wire and separates out each individual frequency, using both of them to generate the tones.

The 'ring' wire is connected to your telephone's bell.

When you go off-hook with your phone, instead of an electric current flowing down this wire it acts as if there was a complete circuit - current flows into that wire from your telephone company, through the network, and back out to another phone somewhere else by way of the receiving phone ringing.

Think of it like this: normally when you pick up your phone, nobody is on the other end so there's no way for electricity to flow between you and anyone else because there are no open paths for it to follow.

When someone calls you, their telephone causes a short circuit somewhere in the network which makes all phones 'ring'. 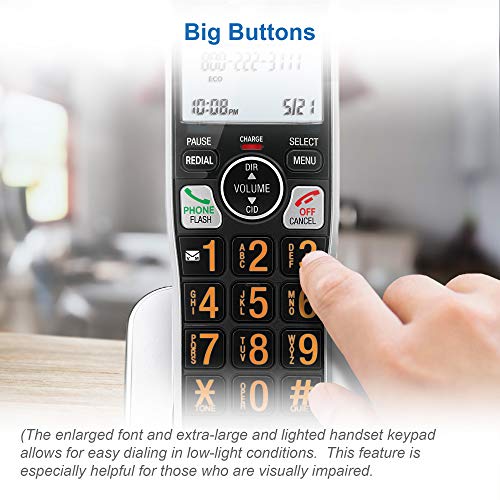 DTMF technology was first developed in the Bell System (later AT&T) laboratories in 1960. However, it took several decades for DTMF technology to become widely available on touch-tone phones. In 1991, AT&T began selling the TeleSPEED-K2 telephone marketed as a "Multifunction Station Phone".

The device was intended for companies that had a PBX with tone dialing. In 1992, the first DTMF phones became available from AT&T for home use.

In North America, pulse dialing has since been almost entirely replaced by dual-tone multi-frequency dialing (DTMF).

One reason for this is that there is a large amount of iron in the wiring between telephone exchanges, and therefore it is better to use a pure tone to send data rather than a pulse that might be distorted by the wiring.

In addition, since pulses are extinguished when the local loop is idle for too long, dialing using pulses can result in excessive wear on mechanical telephone switches due to the repeated opening and closing of the switch contacts as rotary phones' mechanisms try resolutely to "break" an electrical connection.

Thus, it became desirable to use DTMF where possible instead.

A regular land-line telephone does not generate DTMF. Instead, telephones have pushbuttons that generate dual-tone multi-frequency signaling (TMF) directly without going 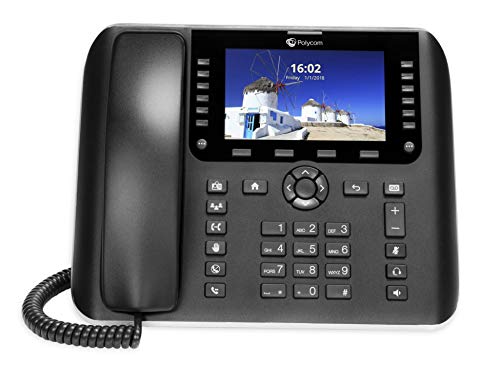 DTMF in digital and VoIP systems

In a digital telephone system, DTMF is generated as the combination of two waveforms. One waveform is used for the low-frequency part and another one for the high-frequency part. The standard specifies how often these have to be generated and their relative power in order to comply with the general specifications for DTMF signals.

In addition, there are requirements on how long each tone has to be present and what relative timing between them should be maintained during the transition from one digit to another.

The majority of FM repeaters utilize carrier squelch, which means that the repeater activates whenever it detects a signal on its input frequency.

With all of the electronics, we have in our homes or businesses, many of which are continuously radiating frequencies, just waiting to set off a receiver.

The Continuous Tone Coded Squelch System (CTCSS) is a more controlled squelch system. The simple concept is that the FM transmitter has a continual tone on the transmitted audio.

-Here is a great article explaining what Squelch is.

When the repeater hears the correct tone, the squelch opens. The receiver remains squelched regardless of how strong the signal is at the receiver if there is no signal.

The system is highly flexible. 50 distinct tones have been established to allow for diverse systems to utilize their own distinctive tones. Some radios do not support all of these frequencies, so verify your radio's instruction book.)

-Here is the full list of the radio frequencies

The system of tones is occasionally utilized in the land mobile service to allow numerous users to use the same repeater without hearing one another on the channel. Each user group has its own unique CTCSS tone assigned.

The CTCSS frequencies range from 67 Hz to 254 Hz. Unlike DTMF tones, which are transmitted for a short time as the key is pushed, CTCSS tones are sent at all times the transmitter is on.

The tones will be heard in the voice signal, which means that they will be there with the regular voice signal. We generally set the tone deviance at around 600 to 800 Hz to prevent the transmitter from going too far off-pitch. Because the tone is always turned on throughout transmission, we don't want it to come through in the receiver.

Although these sounds are referred to as "subaudible," they are within the audible hearing range of most individuals. Voice communication systems are built around a frequency bandwidth of 300 Hz to 3 kHz, which allows for normal speech comprehension.

The user won't notice the CTCSS tone since we eliminate frequencies below 300 Hz before the signal reaches the radio speaker, but we'll still have the required voice frequencies.

What is Digital Coded Squelch (DCS)?

Digital Coded Squelch (DCS) is a more recent signaling technology that has now become standard on most amateur FM transceivers. While it works differently, it may be compared to a digital form of CTCSS.

DCS transmits a digital signal of 134.4 bits per second on the transmit signal, rather than a continuous low-frequency sine wave. DCS has an FM deviation of about 600 to 800 Hz, which is comparable to CTCSS.

The DCS code is a 9-bit numerical value that is the foundation for all DCS codes.

Rather than just sending this binary data out in its raw form, DCS takes advantage of an error correction method. The 23-bit Golay code, a special type of binary number that can correct up to three-bit mistakes in the code, is what DCS uses.

The 23-bit code includes three separate pieces of data: 11 error correction check bits, 3 signature bits, and 9 data code bits. The signature bits are always 1 0 0. The 23 digits are each 7.44 milliseconds long, for a total duration of 171 milliseconds.

What is the difference between CTCSS and CDCSS?

A receiver equipped with CTCSS will reject any signal not matching a preselected frequency transmitted continuously along with the audio, while the receiver of a device using CDCSS uses digital data rather than audio data.

In either case, only those radios receiving signals coded as belonging to the initiating user can respond and participate in the conversation.

CDCSS and CTCSS both allow for suppression of unwanted signals, but use different technologies - analog vs. digital. CTCSS is a specific set of frequencies generated by an oscillator; it's not actually encoded data like CDCSS, which uses binary (digital) encoding.

So only radios that are programmed with the eavesdropper's code will be able to decode and receive his transmissions on that channel, while other users won't even notice he is transmitting because his signal will be filtered out as static unless they have his unique code programmed into their radio.

CTCSS and CDCSS both function as privacy codes so your communications aren't interrupted random signals. However, using a CTCSS allows for a broader range of privacy codes compared to those that can be implemented with CDCSS

As you can see DTMF in handheld radios is a very complex topic. I don't think it's really such a big deal that the radio manufacturers (especially Motorola) try to simplify things by saying DTMF is CTCSS even though this isn't actually true.